Posted by: Thexalon 1 year, 11 months ago 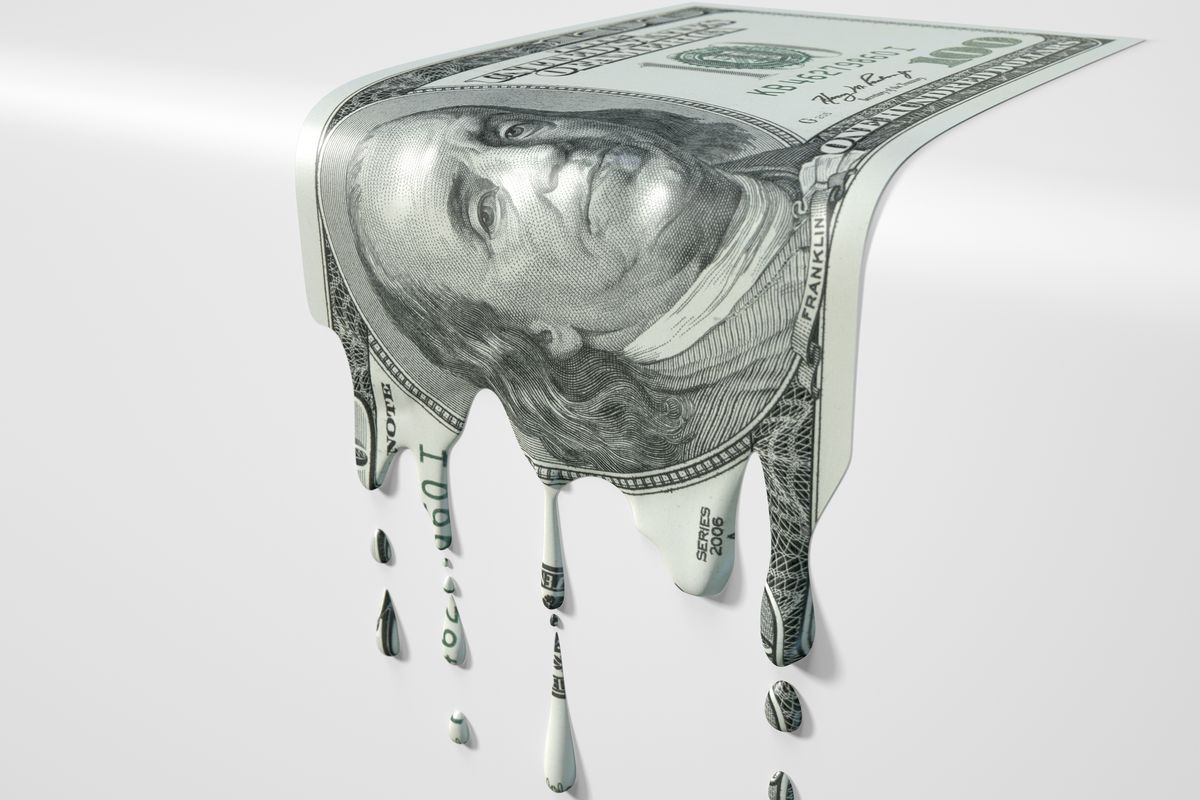 This series starts with a simple thought experiment.

What would happen if you walked up to a total stranger and said "Hi, I'd like a BLT please"? Odds are pretty good that you wouldn't get a BLT or anything sandwich-like at all. It's at the very least not a normal occurrence.

And yet that exact conversation happens thousands of times a day, with the only difference being that you would hand that stranger a piece of paper that looks kinda official and has words like "Ten Dollars" written on them.

Does this seem a little odd to you? Probably not - you were raised in a society where this sort of thing is normal, and you probably were also taught to believe that those pieces of paper represented something, although it was always a bit unclear what exactly it represented. The pieces of paper may be abstracted away into numbers stored in a computer somewher that indicate a right to get pieces of paper at any time, but the important thing is that neither the pieces of paper nor the numbers in a computer have any direct use except in this process of exchanging them for other things.

Often, the idea of what these pieces of paper or numbers mean takes on even (im)moral dimensions. "Well, this person had $10 on them, so they deserve to have a BLT if they want one." "This BLT costs $10, it's immoral to give it to somebody who is hungry but can't pay for it, that just encourages them to be dependent." "The economy depends on consumer confidence, which means people should buy BLTs if they can afford them."

And yet, they keep on getting passed around, and we've built our entire society around them to such a degree that most decisions made by most people involve them in some way.

Debunking the Justifications for Money

Standard economics 101 of the sort taught to high school students and undergraduates states that money serves 2 purposes in the economy: (1) To be a medium of exchange, facilitating trade between various people with wildly different goods. (2) To be a measure of stored wealth and durable stuff.

The trouble is, in both of those roles, money fails to be good at its job. And it's easy to demonstrate it.

Supply and Demand and Prices

The idea of money as a medium of exchange is that you want some sort of way to answer questions like "How many 2-liter bottles of Coca-cola could be exchanged for a brand-new Ford F-150 pickup if we were bartering?" That way, we can have some sort of method of trading stuff around fairly. By expressing those two things in terms of what it's worth as a single third thing, we can say "2-liter bottle of Coke = $2, new Ford F-150 pickup = $28500, ergo 1 Ford F-150 = 14,250 bottles of Coke". Our abstraction helped us make decisions about not only what things we want but how much effort should be expected if we want to get them. This seems to make a lot of sense.

There's just one small problem: Where did those numbers I just used come from?

Classical economic theory says that these prices come from 2 things: The supply of the product (that is, what producers are willing to sell it for), and demand for that product (how much consumers want it). They further posit that the supply is determined largely by how much stuff-and-labor-abstracted-into-money it takes to produce that item, and demand is determined by how useful that item would be for the consumer.

They're dreadfully wrong about this, though, and the proof isn't hard to find. Some examples that demonstrate these problems:

Except they're not. Consider our 2-liter of Coke, for instance: Yes, it sells for $1.99. And if you look at the Pepsi, there it is selling for $1.99 for a 2-liter, so far so good. But if you compare that to generic cola being sold often right next to the Coke, that sells for (at least in the store I most recently bought it from) $0.72. Where did the extra $1.27 come from? If Coke and Pepsi are using a somewhat more expensive formulation, maybe that explains a few cents difference, but this doesn't match.

But it isn't. If you go to a gas station and look in the fridge where they keep cola, it's not hard to find 1-liter or even smaller bottles of Coke for more than the 2-liter bottle cost. How could that be, that less of something costs more?

Let's say we get together our $28,500 for the price of a Ford F-150, buy it, drive it 5 miles to another dealer, and try to sell it to that dealer. Now, a truck is a durable good, i.e. it's something that we can use for a while and still have a truck. Driving it 5 miles burned something like $0.50 worth of gas in the tank, and maybe put another $10 worth of wear-and-tear on the parts, so we should expect that our truck is now worth something like $28,489.

These prices are, at best, an approximation, and that means that the exchanges are not being calculated properly. And that means that the answer to our initial question, how many 2-liters of Coke are worth how many Ford F-150 pickup trucks, could be anywhere from 42,750 to 11,750. We can guess that a Ford F-150 pickup truck is probably worth a heck of a lot more than a 2-liter of cola, but that's really about it, which makes money not a great medium of exchange.

"Wealth" is somewhat of a nebulous concept, but in general means stuff on hand that can be used to solve a problem. That Ford F-150 pickup would be wealth. A warehouse full of 2-liter bottles of Coke are wealth. The machines used to make both the Ford F-150 pickup and the Coca-cola are wealth.

Wealth is generally measured in money. There's a whole industry of appraisers whose job it is to estimate what stuff is worth in terms of money, and a whole industry of accounting to try to consolidate those estimates into an overall valuation of the stuff owned by an individual or organization. These numbers of total wealth get used to determine the value of financial goods like bank loans, stocks, and bonds.

The first thing that can go wrong in measuring wealth with money is that an appraisers' valuation of an item often depends at least in part on who they're measuring it for, and for what purpose. For instance, the same building (e.g. my house) can be worth $83K to the buyer when I bought it, $135K to the government for tax purposes, and $450K to the insurance company when determining the cost of homeowner's insurance. This can get even wilder when the assets being appraised are either unique (e.g. a work of art) or intangible (e.g. a brand name): The item in question is probably not completely worthless, but there's also no clear way to measure its value, so the appraisers have a tendency to just make something up that sounds right.

In short, assessing an item's value is more of an art than a science, and that means that estimates of the wealth of a person or organization are at least partially fictional.

But this can't happen in reality, you think. There are auditors and regulators that exist to prevent this sort of lying about the value of financial assets, right? Wrong! Every so often, the reality of what assets are worth slips out, and when that happens there can be major repercussions, including causing major market crashes. This is exactly what happened in 2008: Loans had been given out that were backed by mis-appraised physical assets and often fictional income levels of the people who had been given loans (see above), and then through complex math the mortgage brokers who had arranged those loans lied about the value of what they had, and then the people who bought them lied about the value of what they had, and so forth, and all was well until somebody noticed that those loans might not get paid back, and the whole house of cards collapsed.

What's Not Even Counted

Assets that are not specifically owned by somebody, or that nobody bothered to measure, are left out entirely and thus valued at $0. This includes things like breathable air, fresh water still in aquifers and lakes and rivers, wildlife, scientific knowledge, or even healthy human bodies.

The upshot of this is that many vital things are undervalued, because they've not been assigned a monetary value.

The use of money as a measurement of wealth is even more wildly inaccurate than the use of money in a medium of exchange. Things that are extremely important and valuable are worthless according to the rules of money, while total fictions and lies can be seen as extremely valuable. The net effect of this is that major decisions are being made that favor fiction over fact.

If money is so wildly inaccurate a tool for managing the economy, why are we using it? And the answer comes down to: Because nobody has come up with an alternative, and it appears to somewhat work for solving the problem of how to circulate and store wealth and other valuable stuff.

The problem is that it's an abstraction, and like most abstractions it doesn't entirely match up to reality. It's an attempt to turn everything into numbers, and then calculating out how to maximize the numbers and losing sight of what those numbers represent. This leads to those with the power to make real changes in our society completely unable to deal with problems that aren't reflected in the numbers, because the numbers are what come first rather than the realities. Also, turning human situations into numbers makes it very easy to turn a blind eye towards starvation, homelessness, untreated illness, and all kinds of other horrors, all because those problems aren't showing up in the numbers.

For the rest of this series, we'll be exploring some of the issues in greater detail: How the illusion of money prevents social problems from being solved, creates inefficiencies in the economy, and has wide-ranging effects on human life far beyond the question of producing and distributing goods and services.